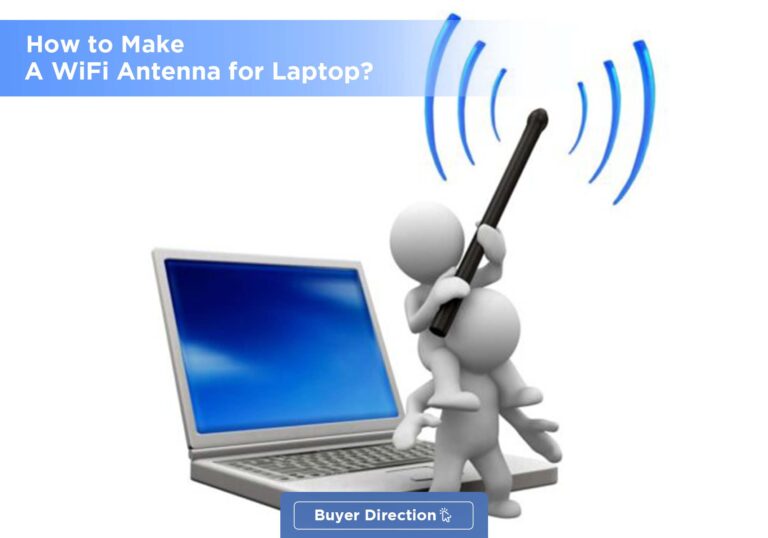 WiFi is one of the important innovations in the digital world, both in private and business environments. Everything around us is connected with WiFi to communicate, e.g., smartphones, printers, laptops, etc.

Table of Contents
What is WiFi Antenna, and how it works?
Which devices have WiFi Antennas?
Where are the WiFi Antennas located?
How to make WI-Fi Antenna at home for the laptop?
First Method:
Second Method:
Conclusion:

The connection of all the devices to each other with wireless local area networks (WLAN) can lead to various problems like poor signals of WiFi. Here antennas play a vital role in facilitating the wireless signal to stream movies and play video games. It also boosts the strength and range of the signals.

This article will provide brief information about WiFi antennas and how to make them for laptops.

What is WiFi Antenna, and how it works?

Antennas are vital components of radio transmissions systems used in WiFi technology equipment. These wireless signals are nothing but electromagnetic waves which antennas pick up and convert into electric signals and radiate outgoing WiFi signals.

Which devices have WiFi Antennas?

All the wireless networking devices and equipment needs antennas to communicate. These devices include wireless routers, laptops, smartphones, tablets, and hotspots with transmitting and receiving antennas. They pick EM waves for further process and convert them into electric signals.

Where are the WiFi Antennas located?

External Dipole Antennas: The external antennas consist of two identical, conductive elements that are still common on many routers, modems and repeaters, and other devices with wireless functionality.

Internal PIFA Antennas: Internal antennas are entirely dominant in their use as all the mobile phones, computers, laptops, and other devices are equipped with them.

How to make WI-Fi Antenna at home for the laptop?

We will explore the most effective and straightforward methods step by step to build an antenna to boost the speed of the WiFi.

First, you have to collect all the materials to make a WiFi antenna for a laptop at home. You need a can of beverage, a scissor, a cutter, an adhesive, and the router of your house.

Open up the tab of bear can. Empty it and rinse it with plenty of warm water and dishwashing liquid for further process.

Take a sheet of newspaper and put it on the table. Put the gloves on your hand for processing

Put the empty can on the newspaper sheet you spread on the table. Use the utility knife’s blade to score around the top rim of the empty can.

Now you have to use the scissor to cut off the rim of that particular can on the scoring you marked with the utility knife. After completing the cutting task discard the top cut rim of the empty soda can in the basket.

After completing the cutting task, clean out the empty soda can with a paper towel and trash that paper out.

Measure out four inches from the closed end of the empty soda can and mark it. Draw a hole with a utility knife at the measured point and then cut it out that hole with the scissor.

Wrap with the duct tape open rim of the cane.

Now take the coaxial cable and cut off its ends with scissors. Insert the cut-off end of the cable in the hole of a soda can and then wrap it with duct tape around to ensure the cable remains secure in the hole.

The soldering process needs some time to cool; after that, wrap duct tape where it attaches with the WiFi plug adapter

Now plug in WiFi plug adapter into the WiFi plug on the laptop to make the connection.

Finally, you have made a homemade WiFi antenna with a lot of range. Now you can take signals of your WiFi router from where you want. Keep things in mind that make a WiFi antenna for a laptop at the price you will not save anything either; it might be a hobby to that amazing hack at home.

Making a WiFi antenna for a laptop with this method requires a pan, screws, nails, USB extension cable, and WiFi adapter. One important thing in making these kinds of WiFi antennas is functionality, and it always goes up the design.

The possible measurement of the pan will be about 279 centimeters in diameter and about 7 centimeters deep.

Measure the center of the pan and perform a hole so that the adapter cable passes through it.

Manufacture the focal point, which is the distance between the pan and the WiFi adapter

We get a focal point of approximately 6, 80 centimeters by putting simple formula (Diameter x Diameter/depth x 16)

Now cut the wood piece according to the measure. Cut another piece of wood to serve as a support and angle to place the adapter.

Use screw or elastic to hold out the WiFi adapter.

The fabrication process of making legs of the WiFi antenna requires cutting two more wood pieces. Height is most important in this method of making WiFi antenna for laptops. You can also use a tripod instead of building the legs of the antenna yourself.

The dimensions of the legs are critical; as we mentioned earlier, the recommended height of the wood piece to fabricate the base of 30 cm long and 5 cm high in dimensions.

The final thing is to paint the whole assembly to keep the aesthetic canons.

There are numerous ways to make a WiFi antenna for laptops. You can even design all these according to your choice and favorite shape. Yes, you must have to buy the materials that are needed in these methods.

Comparing the market available WiFi antenna and homemade can be even more expensive. Still, no one can deny the adventure of making a WiFi antenna yourself and having a good time.