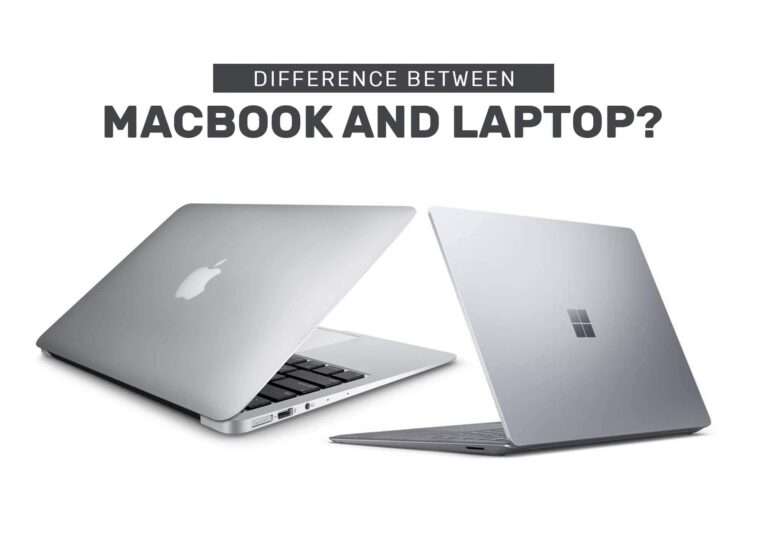 Operating System is the main difference between MacBook and Laptop. A regular laptop operates on Windows, Linux, or Chrome, while MacBook includes Apple’s Macintosh operating system. We evaluated their design, hardware, and usefulness to assist you in differentiating the MacBook from Laptops.

Design of Laptop vs. MacBook

Steve Jobs, the former CEO of Apple, has made Apple’s products appear like pieces of art for three decades. To this day, when it comes to outer aesthetics, there are no matches for MacBook. Design is a function that separates MacBook from Windows laptops with an attractive design. Several designs, though, are a factor in Windows computers ahead of Apple. You may find many different designs in Windows laptops, be it a convertible laptop or student laptop.

Usually, a MacBook comes complete with higher-price hardware components. However, MacBook have superior parts and offer more fantastic speed processors than Windows computers. In addition, RAM is generally higher than a standard laptop, and more storage is available on a MacBook.

Software availability in MacBook vs. Laptop

Accessing software is one of the primary distinctions in the operating system between a MacBook and a laptop. As a result, windows laptops have the edge over their peers, whether they’re working-related applications or amusement. This is an important explanation why Apple laptops cannot attract additional clients.

Many Windows laptops are supported by applications to manage work by companies. Most developers construct their products to target a broader market, in line with the Windows OS. Although Microsoft Apple has joined forces to provide its users the Office Suite, it is still at the back. Likewise, creators of games create laptop games for Windows as more people use them.

However, in the last few years, we have witnessed some gradual growth in this subject. Nevertheless, the critical reason large companies prefer laptops to Macs after pricing assessment is the availability of software.

Hardware in MacBook vs. Laptop

MacBook comes with a superb choice of hardware, but often they are too expensive. On the other side, you can get a Windows laptop for a lower price for the identical hardware combination.

Apple has limited RAM and processor options for its MacBook, but Windows laptops are available in a range of alternatives. For example, a Windows laptop is available with RAMs from 4GB to 32GB.

Windows and MacBook both come bundled with integrated applications and tools. The utilities present in both include the photo and video viewer, the media editor, online browsing, e-mails, calculator, calendar, voice recorders, weather, news, and screenshot. However, there are also many other apps you only get on a MacBook or Windows laptop.

For example, a MacBook provides a better music streaming service, a preview tool, and a higher video editor. The translator, Skype, Sticky Notes, and Xbox Game APPS are available on Windows laptops. However, in terms of utility apps, a MacBook gives an everyday user more value.

Input Methods in Laptop vs. MacBook

Home windows laptops provide full-contact support, and you could get a touchscreen computer at a lower charge. Laptops are a long way better than macs when changing inputs: pen, contact, and dictation. Touchscreen 2-in-1 laptops are first-class for professionals who want to apply the keyboard and screen simultaneously. There is a massive selection of convertible laptops with various specs for any budget.

As consumers notice a few problems, the current butterfly-shaped keyboard introduced by Apple is untrustworthy. Likewise, on laptops with Windows, keyboards are dependent on the producer. The difference is in the customer service, however, and Windows laptops are at the top.

You can easily substitute or repair keyboards on a Windows Laptop while time is needed for Apple. In addition, you can repair or replace the MacBook keyboard selectively in certain stores.

Upgradability in Windows vs. MacBook

A Windows laptop can be upgraded whenever you desire, depending on your IT demands. The components can readily be found, the data upgraded, and hardware replacement is relatively easy. However, updating a MacBook is a different affair because you have to search for specific items. You don’t usually have to upgrade your MacBook because of the high-end specs it is currently loading. But there are few possibilities if you wish to update it.

What is the difference between Mac and Apple?

Apple is the company. “A Mac” refers to a computer that runs any Mac OS Macintosh System 7, Mac OS 8, Mac OS 9, Mac OS X, “The Mac” refers to the OS itself, and people will say “OS X.” “Mac” is short for “Macintosh,” a computer made by Apple, a Fortune 500 company.

Macintosh may mean all machines, but it may also be unique, such as the Mac mini, the PowerBook, and others. “Mac” or “Macintosh” is like an IBM or a Dell or any other IBM compatible brand of computers.

Difference between Mac and Windows

The Mac has Handoff for iPhone users; Windows 10 has a handy phone app that lets you access your Android apps and messages right from your laptop. Of course, your phone also works with IOS devices. Still, its functionality is limited mainly to sending web pages from your phone to PC.

PCs are easier to upgrade and have more possibilities for various components. However, a Mac can only increase RAM and storage drive if it is upgradable. You can undoubtedly play games on a Mac, but PCs are usually better recommended for hard center gaming.